Do you wish to inform all users / customers / transporters / agents about some general information or something urgent? TrakIT allows you to do just that...


The Broadcast Messages feature allows Administrators to broadcast a message (along with an optional attachment) to a group of people. This group can be all TrakIT users, customers, transporters and agents of specific countries.

Go to System > Broadcast Messages to see the list of all the messages that have already been sent out along with the date and time of their broadcast. Click on the message to view the details and the recipients it was broadcast to.

Here is a sample message:

Broadcasting a Message
Click on the 'Create New' button to create a new message for broadcast. The following window appears:

Under the Recipients section, select one or more Entity Types, User Roles and From Countries. Enter a subject in the Subject section and information that you need to broadcast in the Content section. If you need to attach any document with this message, you can do so by selecting a file to include with the message (max 1 MB). Once the message is ready, click on the Send button and the message will be emailed to all the selected recipients.

Note: If you have selected any of the Entity Types as recipients, then you are allowed to select a maximum of four countries.

For further queries and questions about this feature, please contact TrakIT Support.
Posted by Anonymous at 12:29

Over the past few weeks, we've discovered that some Advanced Reports were "hogging" the system and slowing performance. Additionally, these reports were being sent out twice or thrice daily...

As an example, a report was generating about 19,000 rows with 24 columns of data - that is about 456,000 data items in one single report! The resulting Excel file was a few megabytes in size and was being sent out daily.

Upon investigation, we found that the filters for the subscription were set incorrectly, thereby causing large amounts of data to be included in the report.

With the latest update of TrakIT (released last Saturday), we've included a way to measure how long a report takes to generate. Under the Advanced Reports subscriptions, you will see a column "Last Gen" that indicates the number of seconds that the report took to generate the last time it was sent or manually generated.

We've also added a filter for system admins to identify long running reports. Take a look at this screenshot: 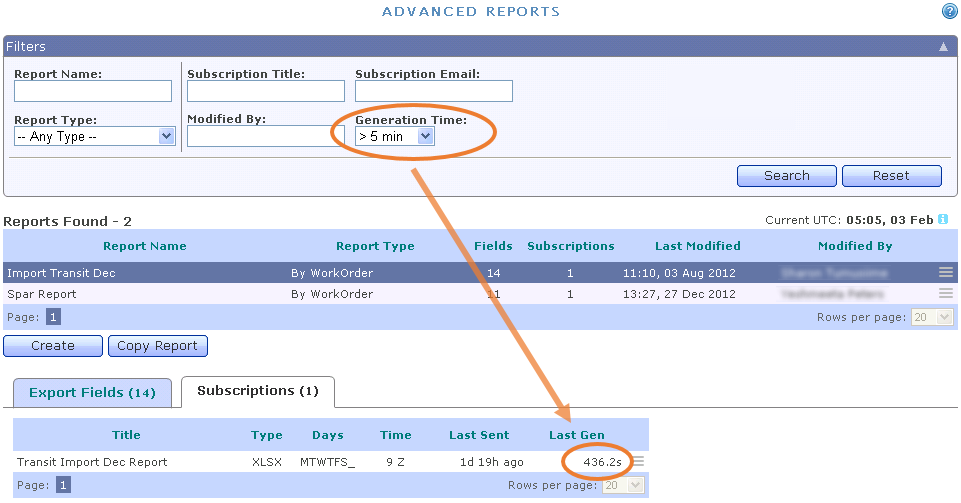 The "Generation Time" filter is currently visibly only to System Administrator - but it will be made available to all admins shortly.

We recommend you go through your subscriptions to see how long the last report took to generate. If you find the figure missing, it will be updated the next time your report is sent out.